President Duque reveals dossier detailing the ELN and Maduro’s planned aggression when he addresses world leaders at the United Nations in New York.

On the second day of addresses of the annual event, at the United Nations (UN) Headquarters in lower Manhattan, President Duque’s 27-minute address in front of the 193 member states detailed the country’s the most pressing challenges.

However, the president also waded into controversy, holding up a 128-page dossier that supposedly details Venezuela’s support of a plot for a cross-border incursion by providing safe haven to a criminal network that has long opposed Colombia.

Volunteering to hand over material to the body’s secretary-general António Guterres, Duque claimed that the dossier contained overwhelming evidence that President Nicolás Maduro of Venezuela has harboured and been complicit with the National Liberation Army (Ejército de Liberación Nacional, ELN) in the guerrillas’ fight against Colombia.

“We will also reveal to you the location of more than 1,438 armed men belonging to the most dangerous and radical wings of the ELN,” the president said to the UN General Assembly (UNGA). “We will indeed share with you 207 sites controlled by […] the ELN in Venezuelan territory.”

“The undeniable presence of these criminals in training camps in these areas as well as the existence of 20 landing strips used for the nefarious and underground activities of drug traffickers, are unequivocal proof of the dictatorship’s sponsorship of these criminal structures of transnational organised crime,” referring to the Maduro administration and ELN.

Duque spoke for the second consecutive year following his election as president in June 2018. Speaking in Spanish, and translated to attendees in the UN’s five other official languages of English, French, Russian, Chinese and Arabic, Duque devoted some of his allotted time to the issue of climate action due to the sustained worldwide outrage at the plight of the Amazon rainforest.

“In one short year, we have committed to and we have succeeded in reducing levels of deforestation by roughly 17% and we are more committed than ever to continuing on this track,” the president said. “Moreover, we have set ourselves the goal of planting 180 million trees by the year 2022.”

Related: Deforestation in Colombia, the forest is burning

It follows the September 6, 2019 Presidential Summit for the Amazon that brought together the presidents of Colombia, Peru, Ecuador and Bolivia in the Amazonian border region of Leticia in Colombia.

“The Leticia Pact […] is an international commitment to [protect] the Amazon,” the president said at the UN. “To succeed in that goal, we will need to properly assess the risks the Amazon faces and champion successful counter-strategies. The Leticia Pact strengthens our capacity to manage, protect and prevent any damage.”

Maduro did not make the trip to New York as both he and members of his government were barred from entering the US. Despite opposition leader Juan Guaidó being recognised by more than 50 members of the UN, Guterres ruled out any meeting on the UN sidelines with Guaidó.

In his address, Duque touched upon the UNGA’s stated theme of galvanising multilateral efforts for poverty eradication, quality education, climate action and inclusion.

“The most urgent challenges that confront us [are] putting an end to extreme poverty, the defence of democracy, the protection of the environment, the promotion of entrepreneurship and innovation, and the upholding of the rule of law – these are the ethical, social and political touchstones that guide the future that we desire for Colombia,” the president said.

Thunberg issued an emotional condemnation of the world’s leaders at the summit’s opening. Breaking all protocol and sitting less than three metres from Guterres, Thunberg verbally accosted and threatened leaders because of their passive climate inaction and empty climatic promises guided by economic growth, not sustainable development, saying, “How dare you”, and concluding her remarks by saying, “If you choose to fail us, I say we will never forgive you”.

The UNGA General Debate will continue until September 30. A taped webcast of Duque’s address can be viewed online with an English translation. The address can also be viewed on youtube. Colombia’s address on September 26, 2018 at the 73rd UNGA by Duque can be found here.

Robert Terpstra has worked as a journalist for more than 16 years, having been based in several dozen countries. He is a Canadian that now resides in Berlin. He has written for several publications worldwide as an editor-in-chief, editorial manager, sub-editor, country editor, news editor, business editor, op-ed columnist and sports editor. 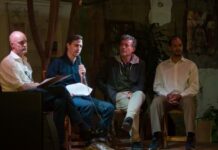 Todos Somos: From Cúcuta to Bogotá by foot 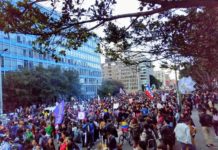 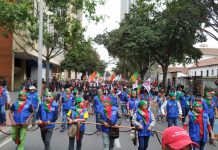