The Colombian league is a third of the way through the season, and for most of the big teams the season looks bright. Santa Fe and Atlético Junior are doing well, both battling on three fronts with the Colombian Cup and the Copa Sudamericana as well. Though ‘los Capitalinos’ have to do it without star man Omar Pérez for five weeks and left back Dairon Mosquera, who tore his achilles tendon and is out for 2015. Independiente Medellin, quarterfinalist in the Cup is also up there in the top spots. Atlético Nacional leads the pack, giving the league their full attention after their disappointing elimination in the Cup. Millonarios exchanges spectacular football with erratic performances. ‘Los embajadores’ are again looking at a difficult season.

The surprise at the start of this season is found in the south of the country. This year promoted side Cortuluá survived the summer transfer window without losing their strong players from last season. Captain Jaime Córdoba is the poster child of the team’s new fortunes. The 27 year-old midfielder was once named in the FIFA list alongside Aaron Ramsey, Douglas Costa, Rafael da Silva and Steven Fletcher as the most promising players in the world. His future looked bright, but he was pushed back by a long list of disciplinary problems. In 2014 no club wanted to sign him but Cortuluá took him in their ranks. He has found his second wind as part of the talented Tulueños who are right besides Atletico Nacional at the top of the table.

Once Caldas from Manizales find themselves at the other end of the spectrum. The former Copa Libertadores winner is at the bottom end of the table. Expectations were high with the arrival of manager Javier Torrente last June. The Argentine, after ten years as Marcelo Bielsa’s assistant manager, he was meant to take the Manizaleños to a higher level. But his actions were to lead to a different story altogether. Early in the season, he got sent off in the game against Junior after comments about the referee. Torrente did not agree and his attempt to physically attack that same referee were heavily punished by the federation with a suspension that will keep him off the pitch until the end of September. The Once Caldas players followed in the style of the manager with a season marked by six sending offs in seven subsequent official games.

With the season approaching its halfway point, everything is still open and that won’t change in the coming weeks.

Media mogul Donald Trump is trying to make his way into Colombian football. Together with real-estate tycoon Alessandro Proto, the republican presidential candidate claimed to have put in an offer to buy Atlético Nacional and that they had made a counteroffer.

Trump told the New York Post, “Nacional wants $150 million to sell the club. For us, the proposal is unacceptable. Maybe they think we’re stupid. We had offered $100 million and that it was an important offer. We are not willing to offer more and continue negotiations. For us it is permanently closed. Now we will evaluate other clubs in Colombia.”

This leaves the door open for other clubs in Colombian football. Atlético Nacional Club President Juan Carlos de la Cuesta denies receiving the offer, he also claims not to be in contact with Alessandro Proto.

Petro vs. Rodolfo: A sporting chance? How Colombia’s presidential candidates compare on sports and culture 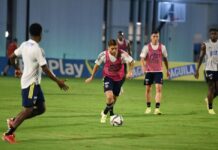 Colombia vs Ecuador: Can Colombia take another leap towards World Cup qualification?