Director of both the show and the company, Grzegorz Bral, kindly took some time out between rehearsals in the Auditorio Leon de Greiff to talk to The Bogotá Post about music, theatre and Bogotá

When this festival started, I sat down with a theatre friend friend from the UK and looked at the programación. My friend spied one name at the end of the run and almost dropped a whole Club Negra on the floor as she exclaimed to me “you cannot miss this show!”. That show was Songs of Lear by Poland’s acclaimed Song Of The Goat theatre association.

The show is non-linear, taking parts of Lear and combining them with music to present a completely different take on Shakespeare than the staid and dull normal versions. I’ve always thought of visuals as being key to Lear, because of his blindness, but Grzegorz rebuts me quickly, “That’s wrong. Don’t think about it like that. I interpret this work through music, like all my pieces. It’s not to do with Lear itself, although Shakespeare is perfect for this type of work.” He leans in, emphasising his point, “I think Shakespeare had a great gift for onomatopoeia. His sonnets and speeches have a very musical quality to them. There is a real beauty to his words.”

Music is the key to all of Grzegorz’s works. He talks directly from the heart when he talks about music and its importance to our lives, explaining with fervour that, “I always work with music. I interpret everything with music, because I think it is honest. Music allows us to feel emotions, to tell stories and narratives. Through music I can show death, love, sex, whatever, so easily, so naturally”. He’s unequivocal in saying that “music is the source of drama. It tells us the story without anything else, the pure emotion”.

He goes further though, explaining how he “see[s] the musicality in how I speak, how the actors speak. These are musical poems, you cannot present them without hearing music in the words”. For him, “there is musicality not only in the instruments, but also in movement and how we move.” “This wonderful venue” he says, gesturing at the gorgeous ceiling inside the de Greiff, “which is not just beautiful in it’s form, but acoustically too, has musicality. Everything about this show is musical.”

He is dressed casually, and drapes himself nonchalantly across chairs, yet his eyes have the gleam of the diamond-hard obsession geniuses often show. The passion in his voice belies his outward image as he replies to a question about how songs allow him to operate: “A good question. Absolutely different. Doing things through music like this allows me to deconstruct the speeches and the language. I am not confined to the normal order of things. Broadly speaking, life is about talking. We do all it all the time, and we have devastated the significance of many words. Most of all, it’s politicians that have done this. Politicians and the media.”

He assures me that he doesn’t include The Bogotá Post in this criticism, before continuing his heartfelt explanation, “With music I am able to reach people without words. Those words that have lost their meaning, I do not need them. Music is a different language and it communicates on a different level. It cannot be manipulated so easily.”

“The worst is the language of devices” he says, disdainfully looking at a phone, “which do only, what, 3% of what words can do, what they are capable of. We have become very lazy”.

Although he speaks with great candour and intellectuality on the subject of music, time runs short and so I ask him how he felt to be invited to the festival. He says, “Of course we knew about it. It has a good reputation in Europe as the largest South American theatre festival. Also, a lot of my friends have been here and everything I heard was very positive”. I ask him about the other acts and he replies instantly, “Well, I saw the trailer for the festival and I was very impressed. It was a good trailer, well-produced, but what really impressed me was the culture, the local influence that came through.”

He’s confident that the show will be a hit here in Bogotá, commenting that “we’ve taken the show to Brazil and Chile, where it appealed hugely to both countries’ audiences. We hope that Colombia will be similar”. After seeing the sheer drama and power of the songs, I am as sure as both my friend and Grzegorz that he’s quite correct. Book your tickets now and avoid disappointment. 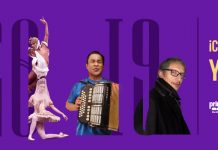